Sheila Chamberlain - It's My Life – Flexiseq Skip to content

Sheila Chamberlain - It's My Life 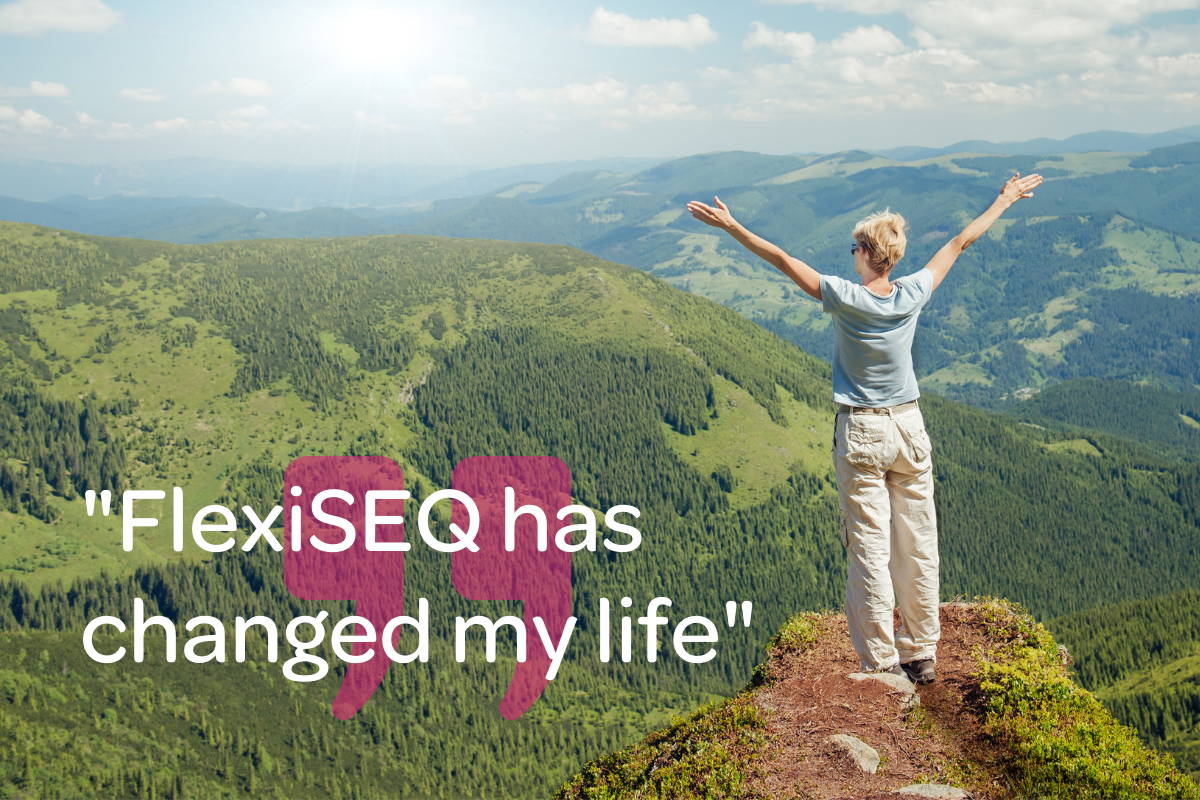 Sheila Chamberlain began her career as an orchestral flute musician, occasionally playing sessions for the likes of Tina Turner and Hot Chocolate, before turning to teaching music and, later, maths.

Recently she found herself with severe joint pain and struggled to do the most basic of tasks. Then, she tried a different solution.

This is Sheila’s story….

I’m 72 years old and for many years have always believed that you have to live life to the fullest. My husband died suddenly in the ‘90s and I was left all by myself with children in their early teens.

I was working two jobs at the same time to support us, but now my kids are all grown up and very successful. I love to be active in my own way, and after I retired I spent my time travelling; in December 2019 I was on a catamaran and swimming off the coast of St. Lucia in the Caribbean.

I’m a massive Bon Jovi fan and I’ve travelled all over the world to watch him play. For my 70th birthday he sent me a personal video message. My favourite Bon Jovi track is, of course, “It’s My Life”. I think it suits me.

“Arthritis was not going to define me. I could only walk with a stick but now, thanks to FlexiSEQ and plenty of exercise I don’t need the stick."

My arthritis came on quite quickly. When the pain first hit me I could only crawl up the stairs and I used to sit with an icepack on my knee for most of the day. The thought of getting up to make a cup of tea became horrible, so at the beginning of the day I’d make a flask so it was one less thing I had to get up for.

I went for an MRI scan on my knee and I was told it’s bone on bone with very little cartilage in between. I’ve been diagnosed with Grade 4 osteoarthritis which is severe arthritis; I’ve got it in one knee and half of the other. I was diagnosed during lockdown so there wasn’t much they could do at that point in time. They put me on very strong opioid painkillers which were no good for me at all. I was taking them every day because it was the only way I could function, but they really upset my stomach so I was on other tablets to address that. Eventually I said, “enough of this, I’m not doing it anymore”.

I did some internet research and found FlexiSEQ which allowed me to stop taking the opioids. This was about three months ago. I thought, I’ll give it a go, it can only be better than what I’m currently going through. Within two days I could feel the difference in my knee.

FlexiSEQ has transformed my life. I make myself walk around the nearby lakes every day. My sons bought me an exercise bike and I use that twice a day for between 20 and 40 minutes.

Before FlexiSEQ I couldn’t do anything; I just sat in a chair and put on weight. Now, I’m back moving and I’ve lost over a stone. I’ve always been quite active and mobile and sitting around in pain just wasn’t me. Only you can do something about your circumstances.

Arthritis was not going to define me. I could only walk with a stick but now, thanks to FlexiSEQ and plenty of exercise I don’t need the stick. Before this phone call I was up a ladder painting a shed. I could never have done that prior to FlexiSEQ. I’m not always pain-free, but I find the gel takes enough of the pain away to get me moving and that in turn makes all the difference to alleviate the pain.

I’ve got a grandson who I simply wasn’t seeing enough of so now I walk him to school every morning and every evening. That would have been impossible to do previously. When I first started walking him it was before the FlexiSEQ so I was using my stick and then the teachers noticed I wasn’t using it anymore. They’ve both got arthritis so they tried FlexiSEQ and it’s working for them too! I’ve also suggested it to other friends and neighbours.

As long as I’m moving, I’m fine. I am so thankful for FlexiSEQ - it has changed my life for the better.