FlexiSEQ contains a lighter formulation of our drug-free, joint lubricating technology and is designed for those with active joints affected by everyday wear and tear.

Whether you're cycling to work, walking the hills, hitting the gym or taking a weekend yoga class, FlexiSEQ provides trusted relief from the pain and stiffness of joint wear and tear to keep you moving.

FlexiSEQ is available in 50g and 100g packs. 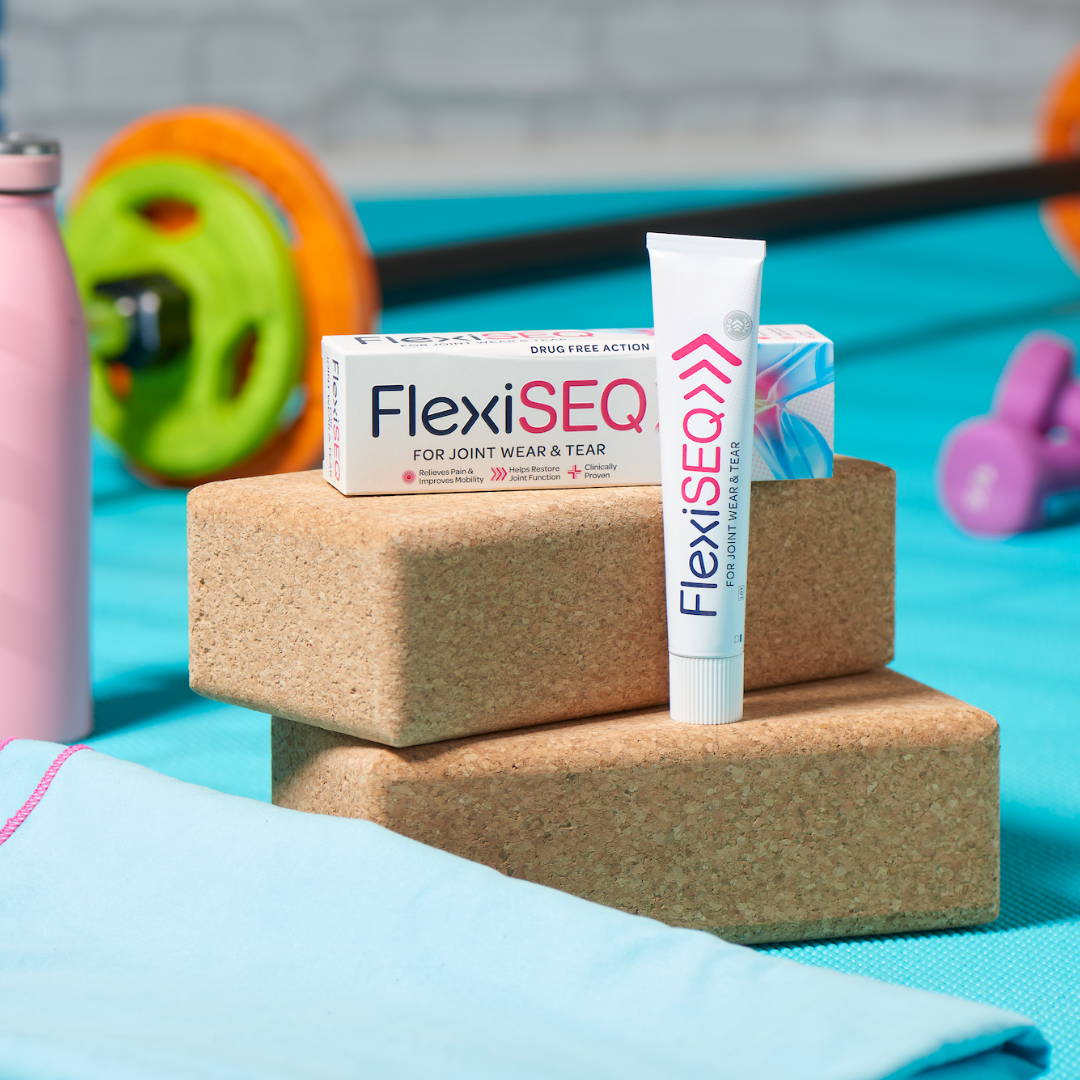 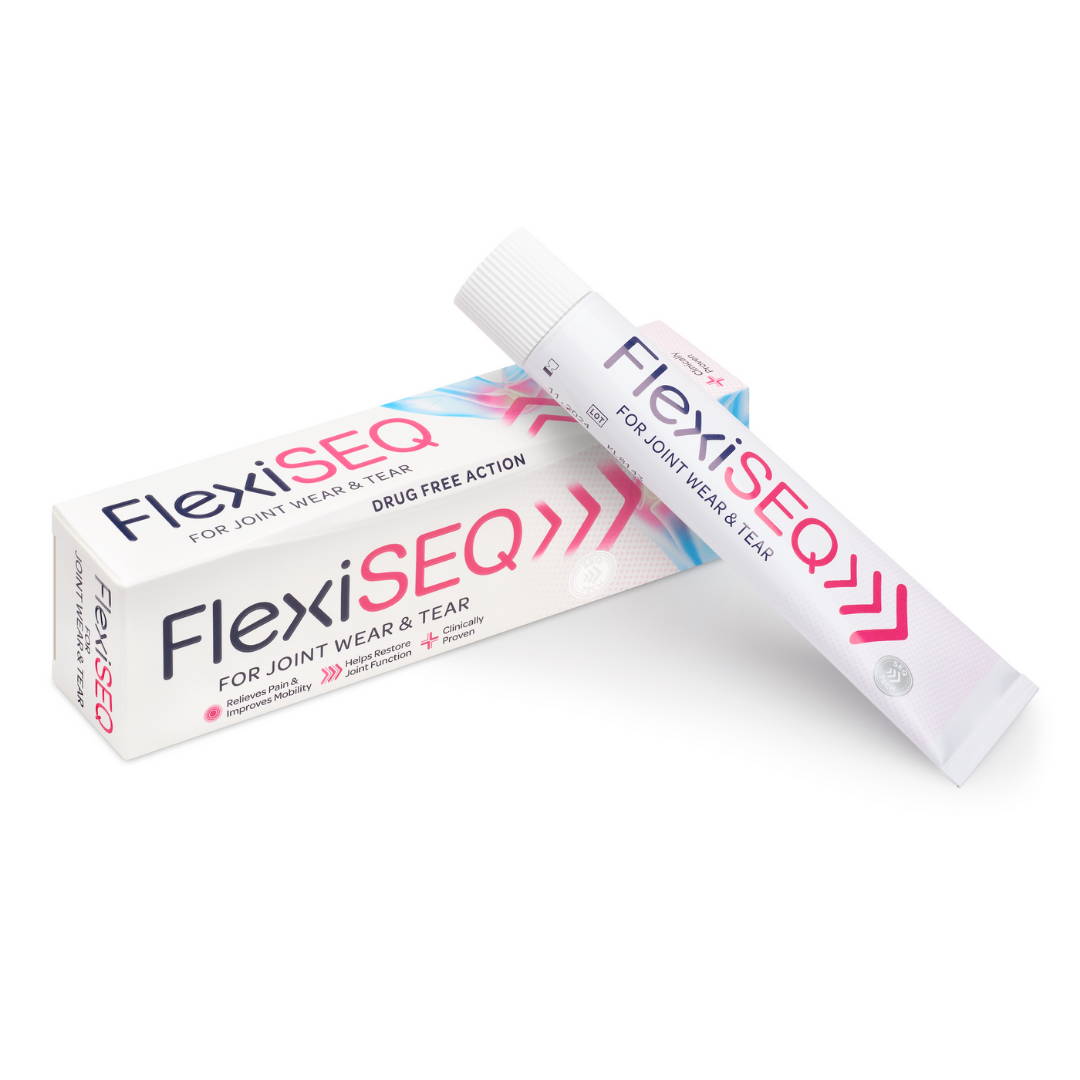 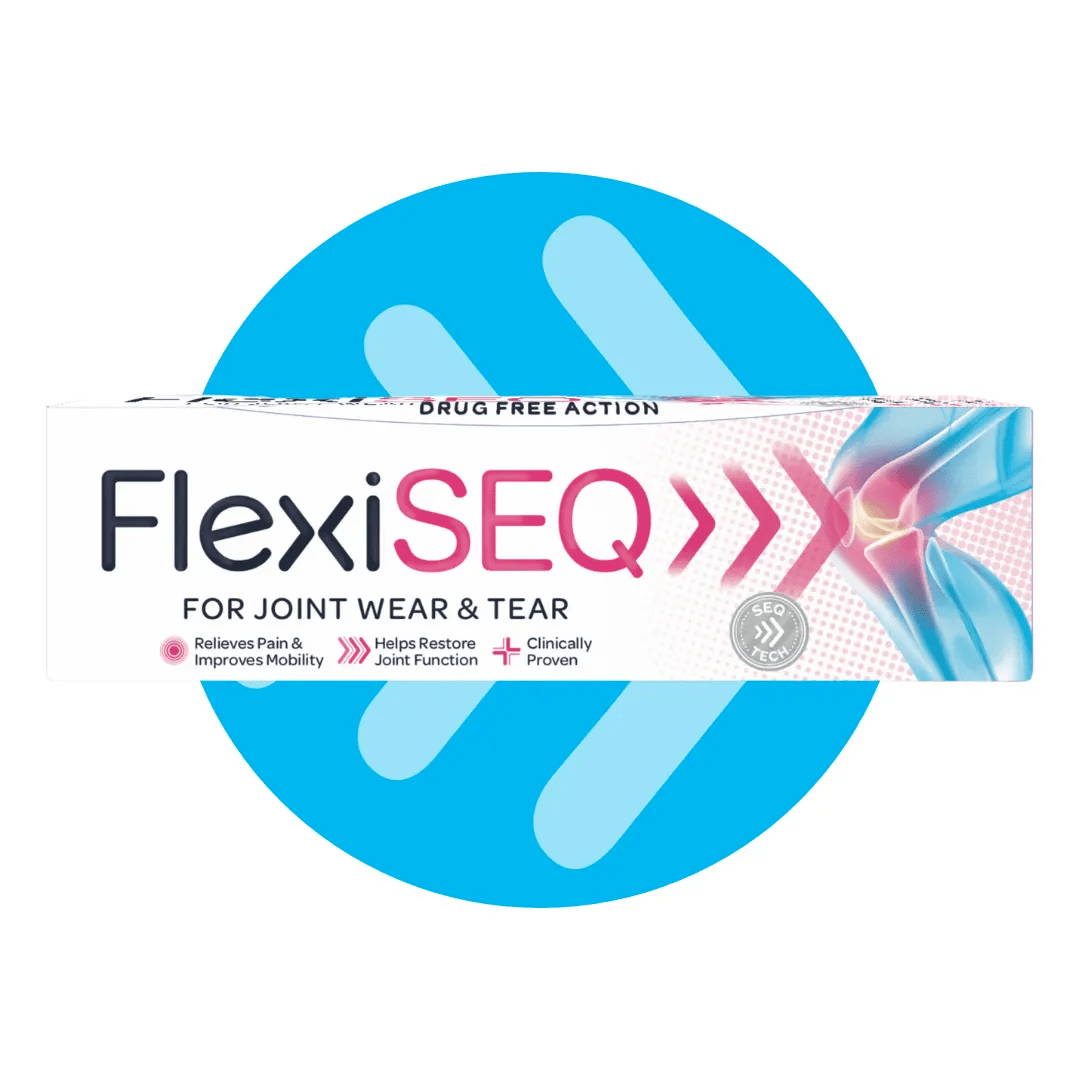 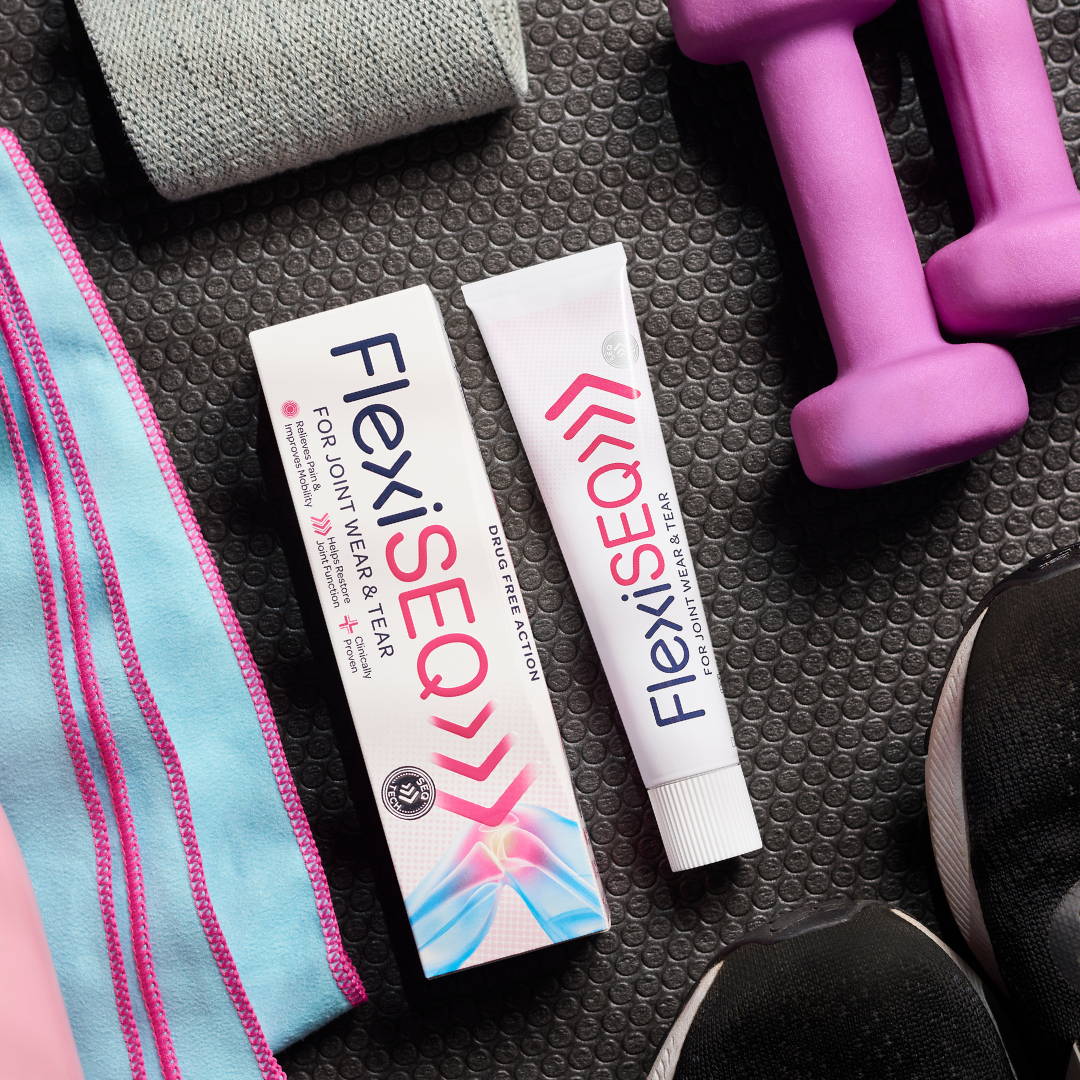 Trusted by professional sportsmen and women around the world, FlexiSEQ is specially formulated for joints that have to cope with the demands of a more physical lifestyle.

Apply FlexiSEQ twice a day in the morning and evening to affected joints, including hands, knees, hips and shoulders.

In studies across almost 1,500 osteoarthritis patients, FlexiSEQ showed improvements in pain, joint stiffness and physical function, as well as an impeccable safety profile.

And don't forget to check out the results of our Experience Study and user reviews. Activated when our gel dries on the skin, these tiny, flexible droplets pass through the skin and into target joints, where they localise on cartilage surfaces to form a lubricating layer.

"Just because my football career is over, it doesn't mean the end of my days in the gym. Now more than ever it's important for me to stay active and FlexiSEQ helps me do just that."

FlexiSEQ gels are drug-free and relieve the pain and stiffness associated with osteoarthritis. FlexiSEQ exerts its pain-relieving effect via lubrication of the joint which is a physical mode of action. It has no pharmacological, metabolic or immunological activity. FlexiSEQ is a gel containing Sequessome vesicles (SEQ Tech), which are tiny lipid spheres. As the gel dries on the skin, these spheres change their shape and pass through the skin, then into the joint where they lubricate the surface of the cartilage to provide relief from pain and stiffness. They are compressible and deformable, yet stable.

Patients with joint disorders such as OA have been found to have reduced levels of lubricants in their synovial fluid and this is one of the factors contributing to the pain and loss of joint function in patients with OA. There is also strong evidence in published literature that liposome vesicles can act as a bio-lubricant in the knee joint, and hence can reduce pain and improve mobility.

What is the difference between FlexiSEQ (for Joint Wear & Tear) and FlexiSEQ Max Strength (for Osteoarthritis)?

All FlexiSEQ gels contain Sequessome Technology – tiny lipid spheres that pass through the skin when the gel is applied topically. FlexiSEQ Max Strength (for Osteoarthritis) contains the maximum concentration of these vesicles. FlexiSEQ (for Joint Wear & Tear) contains a lower concentration of the vesicles, making it lighter and therefore suitable for less severe symptoms of joint wear and tear.

Which FlexiSEQ product should I choose?

All FlexiSEQ products contain Sequessome vesicles (SEQ Tech) – the tiny lipid spheres that pass through the skin when the gel is applied topically. Fully concentrated FlexiSEQ Max Strength (for Osteoarthritis) is clinically proven for the pain and stiffness associated with osteoarthritis and is the gold standard product we offer. Patients seeking maximum strength treatment for their condition should choose this formulation.

FlexiSEQ (for Joint Wear & Tear) contains a lower concentration of Sequessome vesicles (SEQ Tech), making it lighter and therefore suitable for the daily needs of active people whose joints suffer from wear and tear.

Both products offer a drug-free alternative for the treatment of joint pain and stiffness which means patients can avoid drug-based side effects that can be caused by traditional painkillers such as diclofenac and ibuprofen. In addition, FlexiSEQ products can be used alongside medications without interference, and by patients with other conditions (co-morbidities) without exacerbating their other conditions.

Are FlexiSEQ gels right for me?

Any patients with OA or joint pain and stiffness caused by wear and tear to the cartilage can use FlexiSEQ products. They are of particular interest to:

Patients for whom other treatment options (NSAIDs, COX-II inhibitors, paracetamol, etc.) should be avoided or used as little as possible, either because of their other medical conditions, patient age or their concomitant medications. This includes patients with cardio-vascular (CV) or gastro-intestinal (GI) risk factors and problems.

Patients who are not receiving adequate symptomatic relief from their current treatment and want to add another option.

Cautions: Patients with known sensitivity to any of the ingredients listed on the box should not use FlexiSEQ. Pregnant women should consult their doctor

Where can I purchase FlexiSEQ?

How well do FlexiSEQ products work?

There have been several clinical studies evaluating the safety and efficacy of FlexiSEQ across a range of doses representative of the three products, and these have consistently demonstrated average reductions in pain and average improvements in physical function.

In a recent FlexiSEQ User Experience Study, the key findings were:

These same studies have also demonstrated the safety of FlexiSEQ products: the most commonly reported side effects were mild/moderate skin irritations. In addition, there have now been over 100 million applications of the product and, unlike other oral and topical treatments, there have been no reported incidences of systemic side effects (such as gastro-intestinal problems) related to the use of FlexiSEQ. This lack of systemic exposure also makes these products safe to use alongside any other therapy.

What are the differences between FlexiSEQ and other pain treatments?

Unlike most pain treatments, FlexiSEQ treatments are drug-free and therefore have an excellent safety profile. They can be used by patients with other conditions such as high blood pressure and by patients who take numerous medications. Unlike drug-based painkillers, which can only be used for short periods, FlexiSEQ can be safely used long-term as part of your daily healthcare regimen.

FlexiSEQ has a physical mode of action, while Non-Steroidal Anti-inflammatory Drugs (NSAIDs) have a pharmacological effect and alter physiological pathways in the body. NSAID use is often associated with gastrointestinal (GI) side effects such as ulcers, and cardiovascular (CV) effects such as increased risk of a heart attack and these side effects can be very serious. In contrast, the side effect most commonly reported for FlexiSEQ is mild or moderate skin irritations that are temporary and usually resolve over time without stopping treatment.

There is increasing awareness that oral NSAIDs are not suitable for patients with certain other conditions (such as heart disease, asthma and stomach ulcers), or those who are on specific medications or are elderly. These patients will therefore benefit from the availability of this drug-free, effective topical treatment.

Patients already taking NSAIDs may also use FlexiSEQ in combination if additional pain relief is required, whereas topical NSAIDs cannot be used alongside oral NSAIDs at the same time. More details about the concerns with NSAIDs can be found at the National Institute for Health and Care at http://cks.nice.org.uk/nsaids-prescribing-issues.

How quickly does FlexiSEQ work?

Twice-daily treatment with FlexiSEQ provides pain relief after as little as 2 days, which is comparable with the onset of sustainable pain relief to other OA therapies. It may take several days for the full effect to be seen.

Can FlexiSEQ be used alongside medications?

FlexiSEQ does not contain any active pharmaceutical ingredients and therefore cannot compromise any existing oral medications, such as low-dose aspirin, paracetamol, diuretics. If you have any specific concerns, a pharmacist or doctor should be consulted.

If your question isn't answered above, please refer to our full FAQ page for more.