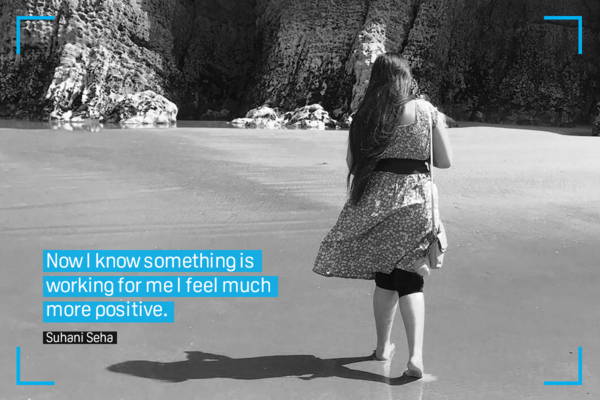 Suhani Seha was only 27 when a freak accident left her nursing pain and discomfort in her knee.

Initially bedridden by her injury, Suhani’s mental health took a turn for the worse as her independence waned and she found work a struggle.

Bit by bit, she’s getting back on track, but with one eye on finding a long-term solution to her pain without relying on drugs, she took part in the Flexiseq Experience Study.

After applying Flexiseq every day for a month, it’s fair to say she’s pleased with the results...

I used to love long walks but when I had my accident my life changed. I was in a pub with a friend and I accidentally got knocked to the floor. I fell very hard on one side of my body, landing especially hard on my knee.

I didn’t realise the extent of the injury initially as it didn’t hurt that much at first. After two to three days I could not walk. Literally, I couldn’t get out of bed because my knee was so swollen. Eventually, I had an MRI scan and it showed that my injury was pretty bad and to the bone. It took about a month for the pain to subside at which point, thankfully, I began to forget about it.

Unfortunately, a month later, the pain returned. I was in agony. To make matters worse, I was working really long hours and in my role as a risk manager, I spend a lot of my day standing around. What I didn’t do before going back to work was check with my doctor whether the healing process had been completed. Instead, I relied on paracetamol. It could only do so much, so I was given something stronger.

When I started the Flexiseq Study I was sceptical at first. I wasn’t convinced it was going to work for me and at first I didn’t notice much of a change. About a week in, I began to notice I could walk a little more and the stiffness in my knee was reduced. I could stand for long periods of time without pain. What’s more, at night, when the pain used to be really bad, I found my knee was hurting less and less.

Since the Study ended, I’ve continued using Flexiseq and I’ve even recommended it to one of my friends at work who has a hip and ankle problem. She is a little older than me, 40, and in more pain, but after a week of using it, she called me to tell me it’s working. She had taken injections before and hadn’t found relief. I’ve recommended it to my mother-in-law as well who has hip problems.

Flexiseq has allowed me to be more adventurous. I can see my knee gradually getting better. Something I didn’t expect is that Flexiseq has really benefited my mood. When I was in pain all the time I was often down and frustrated by the situation. Now I know something is working for me I feel much more positive.

Easy To Do Arthritis Knee Exercises

The Importance Of Self-Care When Living With Arthritis

Mike Tayler - It's All About The Marketing

Lynn Hughes - Back In A Happy Place