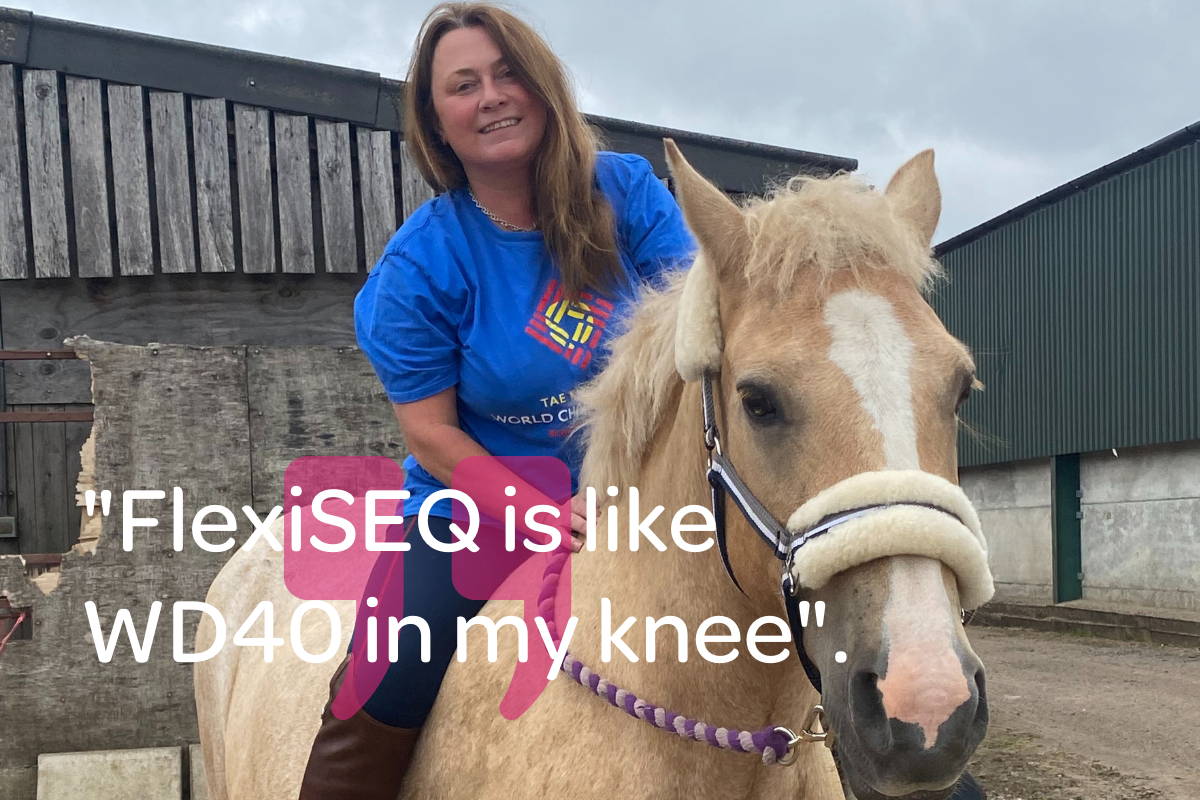 Sarah Ginger has been practicing Tae Kwon Do since she was very young. She has competed at the highest level of the sport, before becoming an instructor 15 years ago.

When an accident caused major damage to her knee, Sarah’s lifelong passion for Tae Kwan Do was under threat. But only in her early 50s, Sarah was not yet prepared to give up.

This is Sarah’s story….

I’ve practiced Tae Kwon Do from a very early age, I first got into it through a friend of my dad’s.

Tae Kwon Do is a very active sport, and very much a contact sport. You’re putting a lot of strain on your knees and hips due to the lateral movements on your joints, as there’s a lot of kicking involved.

I competed at a very high level. I have been the British, English, Spanish and Catalan Champion during my career and I’ve achieved silver and bronze at World Championship level.

I’d been doing it all my life and once I hit a certain level it made sense to take my exams. After my exams - which you have to be invited to take - I formed my own club called Sarah Ginger Tae Kwon Do and it’s gone from strength to strength.

“It’s so frustrating when you’ve been so active all your life, and then pain starts to hold you back - it’s like part of you is being taken away. I feel I’ve got that part of me back now; FlexiSEQ has made a massive difference in my life. "

My injury came about when I was competing. The first injury snapped my cruciate ligament about 16 years ago; it was horrible, I heard this awful pop, I landed and then my knee gave way. They did an operation and they said that I would get arthritis when I get older as a result of the injury, but I wasn’t expecting it quite so young. The joint was never quite right afterwards.

My second injury came about when I kicked someone during a competition and I felt something go in my knee. I had an arthroscopy and the surgeon told me my knee was destroyed. The advice he gave me was to sit down, and that there was no real hope for me to be able to move freely again. I was devastated, because I don’t sit down.

I sought out a really good knee surgeon who told me not to sit down and to stay as fit as I could, but I was in a lot of pain. It was him who mentioned FlexiSEQ in the first place. Over the past year and a half I was really struggling; some days I was on crutches and my knee was so unstable I could barely put my foot on the ground. Little things, like walking my dogs, became really hard.

I’d completely forgotten what the surgeon had said about FlexiSEQ, but I went into a chemist and saw FlexiSEQ sitting there and it triggered my memory. The chemist told me that he has customers who swear by it. FlexiSEQ started to work for me within 3 to 5 days of applying it morning and night. Now, I never forget to apply it - it’s become part of my routine. I have horses, so not much is going to hold me back. FlexiSEQ has made a difference to my riding as well - trotting used to really hurt but not anymore. Not only that, but I just walked 10 miles over the weekend.

I was told I had severe Grade 4 arthritis in my knee. It used to grind, and I couldn’t bend it or straighten it. Now, thanks to FlexiSEQ, I can straighten it again. The transformation I’ve seen in my knee is unbelievable. I used to take naproxen for the pain but I’ve barely taken it since using FlexiSEQ. That FlexiSEQ is drug-free is a huge draw; it means there is a drug-free alternative that actually works, which is amazing when I’ve tried so many other options that just haven’t worked for my arthritis.

I have been told that I need a new knee but I don’t want to do that if I can help it. At the moment, thanks to FlexiSEQ, I don’t feel I need that replacement. Honestly, FlexiSEQ is like WD40 in my knee.

I’ve recommended FlexiSEQ to so many people. I’ve got a farmer friend whose fingers were crippled after lambing, he couldn’t pick anything up. So he started using FlexiSEQ on my recommendation and now he cannot thank me enough.

If I kicked before FlexiSEQ, the next day the pain was awful. Now, I can kick again and not pay for it the next day. It’s liberating to be able to demonstrate kicks myself rather than asking a student to demonstrate.

Being able to be pain free and get active again has benefitted me hugely. It’s so frustrating when you’ve been so active all your life, and then pain starts to hold you back - it’s like part of you is being taken away. I feel I’ve got that part of me back now; FlexiSEQ has made a massive difference in my life.