Nigel Clough, osteoarthritis and me: How Shaun Barker battled back fro – Flexiseq Skip to content

Nigel Clough, osteoarthritis and me: How Shaun Barker battled back from the abyss 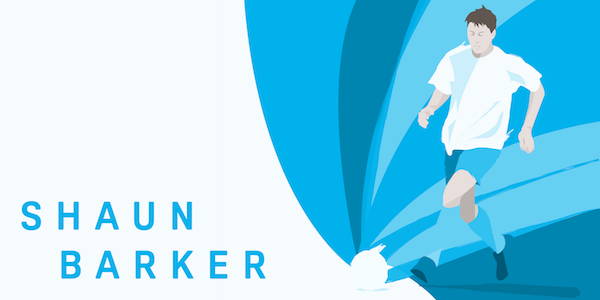 Shaun Barker was at the peak of his powers. The central defender was a regular for Derby County and was playing in the second best division in England. He was widely admired; popular with managers for his professionalism and leadership skills, and loved by fans for his relentless commitment. Then disaster struck. In a match against fierce rivals Nottingham Forest in the East Midlands Derby, a freak incident shattered Shaun’s knee and put his promising career in jeopardy. This is his story...

The East Midlands Derby was always special. I’m a local lad…
Those games were so intense. I’ve got family and friends that are Forest fans which always added spice to the games.

The incident was so innocuous.
I went to clear it and my keeper came out, clattered against me and their striker, and my leg bent in the opposite direction.

I heard a snap and felt my leg go.
My initial thought was I had broken it but unfortunately the injury I sustained was a lot more serious.

I’ve had five operations on my knee.
Throughout my whole rehabilitation all of the signs were telling me to knock this on the head, but I always believed something would change. I never stopped believing that something would make a difference.

I worked tirelessly...
For two and a half years in the gym, on my rehabilitation, recovery and strength control. I spent the first six to 12 months lying down and almost two years lying on a bed; just me, my thoughts and a physio. So much time was spent on the machines - I had to be on one for 12 hours a day. Slowly but surely the range of movement came back to me. I was using ice machines and baths for four hours a day.

In a strange way I really enjoyed it; they were some of my favourite times as a footballer.
It was just a case of believing, being positive and enjoying the recovery process. I had to test myself to see whether after five years of recovery and treatment, that footballer was still in there somewhere. I suppose a lot of people involved in football struggle to see it, but there are far worse things than a dodgy knee! I’ve enjoyed the separation and the focus required to find your inner strength to keep that drive and hunger.

My special upbringing helped me.
My mother and father decided to become foster parents when I was two years old so during my lifetime we’ve had about 180 children pass through their house. I’ve seen what people have to really suffer with, so my problems seemed pretty insignificant in comparison. I think that gave me a good outlook on my rehabilitation.

It got to a stage where I was willing to try anything and everything.
And that’s when I turned to Flexiseq. With Flexiseq it just felt that my knee was a little less clunky and grindy; it felt like there was less friction and just a little more substance to my joint that allowed it to feel more natural. So I started using it two or three times a day.

Nigel Clough gave me a chance to play football again.
After Derby released me, he offered me the chance to play football again at Burton. It wasn’t to start games, but he wanted me around the club to hopefully give the younger lads a bit of guidance. It took me just shy of five years to get back on a first team pitch again. It was a long, arduous, monotonous, frustrating five years to get there [for the last few minutes against his old club Derby], but it was worth every ounce of effort and determination.

I do suffer from osteoarthritis.
One thing you have to do with your joints is stay strong, make sure your muscles are working and moving. I still do things like biking and low impact exercises because I’ve done it all my life. Now I stay active to keep myself fit and healthy.