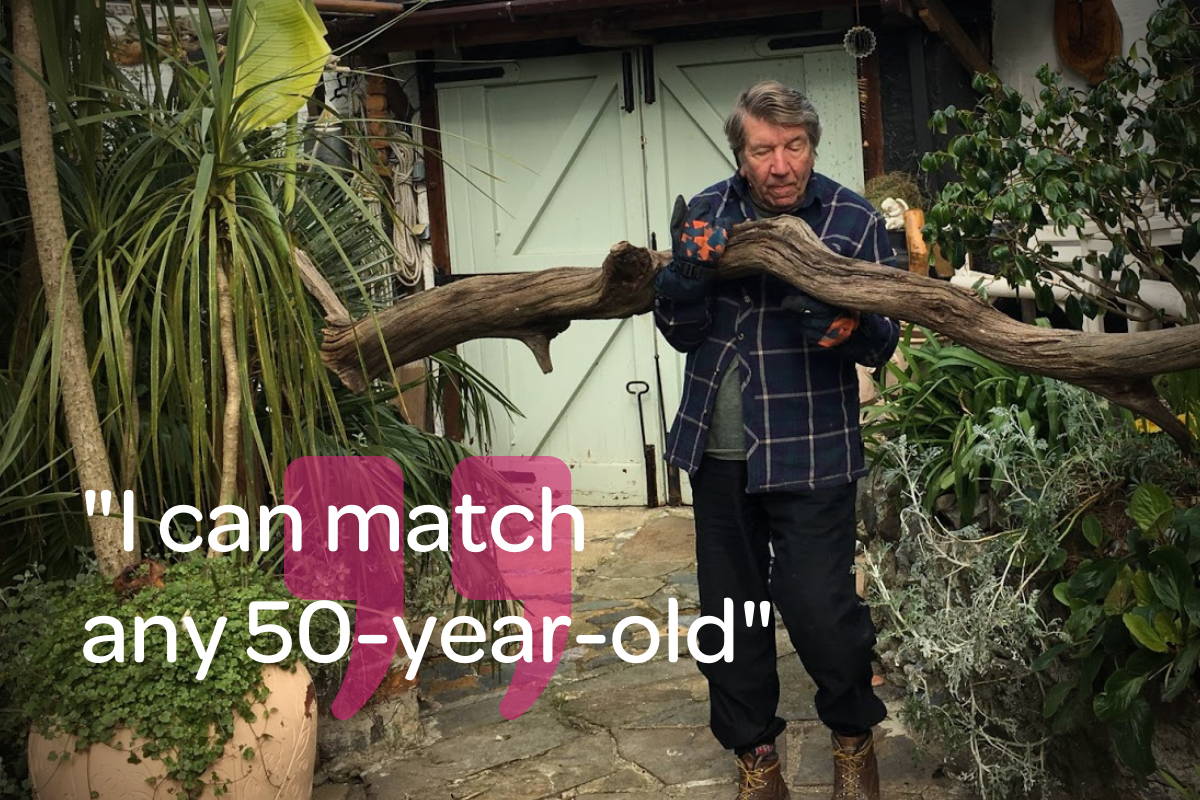 Mike Watkins has always led an active life, but it’s still mightily impressive that at the age of 86 he’s renovating a coach house all by himself.

What’s his secret? Keep reading to find out…

I’ve always lived an extremely active lifestyle. Before retiring, I was a captain in the Merchant Navy and I then went on to become CEO of a mining group in the days of the National Coal Board. I later ran corporate chartered boats. You have to be physically fit to do all those things...I was fit then and I’m still fit now. I’m currently rebuilding a coach house belonging to the estate nearby. I’m doing it by myself at the age of 86.

I’ve had a few operations along the way, but the doctors always recognised I was in good shape. I remember one saying, “this man might be biologically closer to 90 than he is 60 but he’s extremely fit!”

Six years ago, I found myself really struggling with an ankle problem. The pain was so bad that when I took the dogs for a walk, I had to use a crutch. I went to the same doctor who’d operated on my knee a few years earlier and he took one look at the X-ray and told me it was advanced arthritis in the joint. The pain I was experiencing was due to there being no cartilage, it was bone on bone. He told me that he’d have to weld the ankle together which would have left me with a flat foot. I didn’t think I had any other options, so I agreed. there’s almost no cartilage in there at all. So it was bone on bone pain I was experiencing. This was in 2015. He said all he could do was weld the ankle together which would have left me with a flat-foot. But there was no option so I agreed to have it done.

“I don’t need a crutch anymore, I’m confident on my feet and know my joints can support me. "

Not long after my daughter, who was living in Burma, fell while horse riding and injured her back. She’d been using FlexiSEQ to relieve the pain and recommended I give it a go. I popped to the pharmacist, picked some up and started applying it to my ankle. Within a month the pain was basically gone! I ended up writing to the consultant, thanked him for his help and told him I no longer needed the operation.

I started to put it on my ankle and within a month of using it the pain was basically gone. I was so appreciative of this. I even went so far as to write to the Secretary of State for Health to let him know what had happened. I wanted to tell him that FlexiSEQ was saving taxpayers’ money!

I don’t need a crutch anymore, I’m confident on my feet and know my joints can support me. I can match any 50 year old you want to put up against me.

These days, I tend to use FlexiSEQ on my right hand. I’ve got arthritis that causes my palm to ache but the gel sorts me out. My partner has also been using it on her knee and has shown considerable improvements.

Because I always try and avoid taking drugs, FlexiSEQ ticked so many boxes for me. The medical people wanted to put me on a well known Ibuprofen gel and very quickly I realised I would get about as much benefit from putting on my partner’s face cream, it did nothing for me. The thing with a painkiller is it just hides the problem, FlexiSEQ gets right to the cause of the pain.