Georgia Bone - Find Something & Stick With It – Flexiseq Skip to content 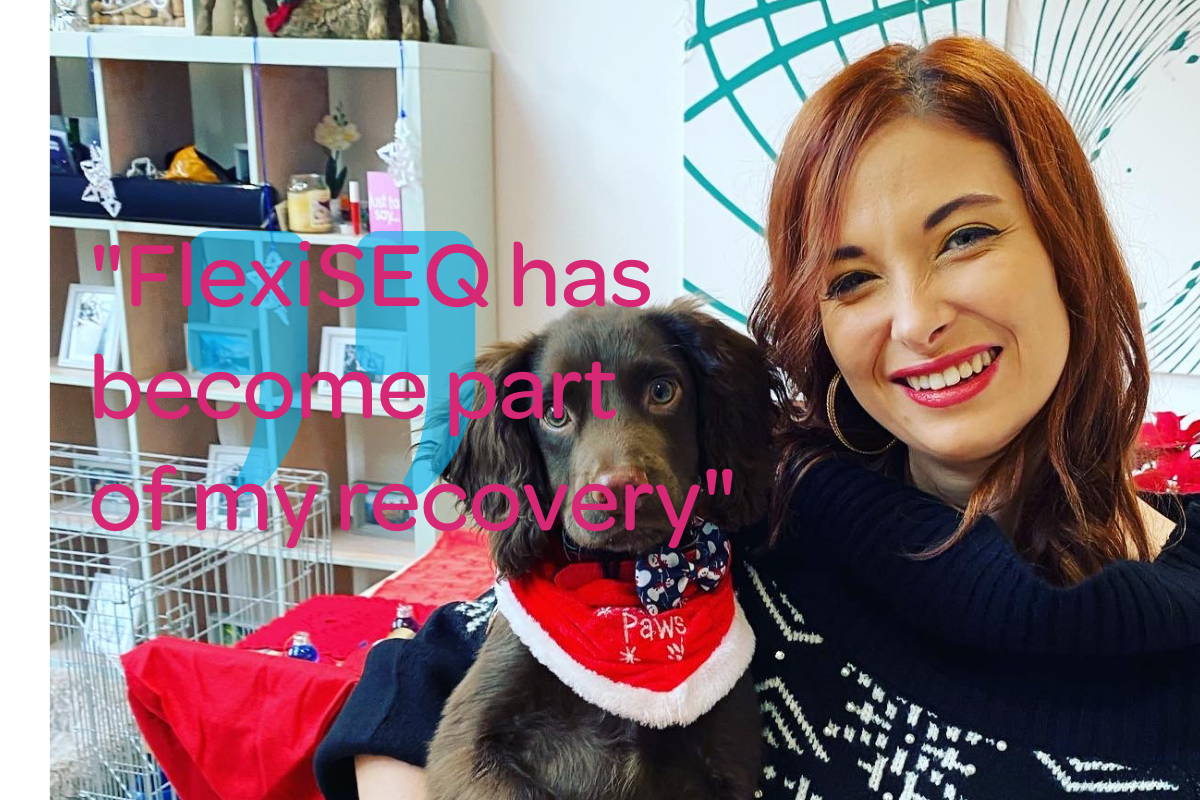 Georgia Bone is a 27-year-old TV production manager. Since the age of 15 she has struggled with joint pain but always assumed she was too young for it to be arthritis - until she worked on a particularly special campaign video.

This is Georgia’s story….

I work in TV production, which involves a lot of sitting at a desk before a shoot day, which then means being on my feet for long periods of time, running around making sure everyone has what they need.

I am a very active person in my spare time. I love to play netball, I swim, I cycle and I’ve recently started going to boot camp.

When I was 15 years old I was skiing for the first time. I ended up going down a black run and I fell and twisted my knee. That’s the only trauma I’ve had with regards to my knee. A couple of years later it started to really swell up whenever I was playing netball and would cause me a lot of pain.

It had a huge impact on my physical and mental wellbeing. The pain stopped me doing so many of the things I love doing. Every specialist I saw would say “avoid doing this, avoid doing that, just walk on it,” but it got to the point where even walking was an issue. So I stopped doing all these things and it got worse.

Then I went into work and was doing a desk job that didn’t involve being very active, so I was sitting around all day for many years. I was referred to many physios and doctors. The doctors thought it might be early-onset arthritis based on the scans.

“My advice would be to speak to experts, physios, chiropractors and do your research, but also look for things like FlexiSEQ that might be a little bit different to endless painkillers."

I love doctors and salute what they do but as a young woman you tend to get laughed out of some offices as they just think there’s nothing wrong with you. They made me feel like all of the pain I was experiencing was in my head, but the joint pain was really impacting my work and my personal life. During lockdown I actually started a podcast about women’s health. When you go to a doctor you’re given a couple of minutes and given a pill to take.

The pain and dismissive treatment I felt I received from medical professionals had a massive impact on my mental health. I moved up North to be with my other half and I didn’t know anyone here. The way I get to know people has always been through things like netball so I found myself quite isolated. I struggled the first few years because I was being told I couldn’t do certain things. I decided I was going to do it anyway and it opened up a whole new range of social interaction for me. I feel like I’m back to the version of me I want to be.

Recently, we were working on a shoot with Football Focus host Alex Scott, and it turned out to be a shoot for FlexiSEQ. Hearing Alex’s story of how she had been diagnosed with arthritis due to an injury to her ankle felt so familiar to me, so I asked some of the FlexiSEQ team on the shoot about the product and they were kind enough to give me some to try. I’ve been using it ever since!

I put it on every night and after I’ve been active, so often after a game of netball I’ll ice my knee and then put on some FlexiSEQ; it has become part of my recovery process. I’m still using it months later and am so impressed with it - it has taken the edge of the pain so that I’m able to get on with the things I love.

My advice would be to speak to experts, physios, chiropractors and do your research, but also look for things like FlexiSEQ that might be a little bit different to endless painkillers. There are solutions out there, but more often than not you have to go and find them yourself. No one knows your body better than you do, so if you think there is something wrong, keep looking until you get a solution that works for you. Once you find that solution, stick with it.

A great example of this is my boot camp trainers; early on I told them about my knee so they tailored my workout to build up the strength in that knee to support it. It’s about finding the right people in your life who can help you. The right support combined with the right treatments - like FlexiSEQ and the other supplements I take - can make all the difference. Build up your own team of healers and products.